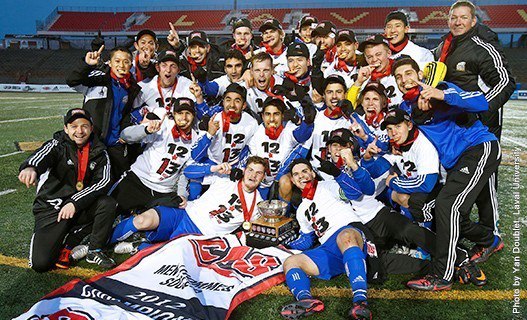 What a unparalleled season the UBC Men’s Varsity soccer team had this year. The champions of the 2012 CIS nationals were undefeated in the regular season. I have had the pleasure of joining the team as the team chiropractor early in the season. My goal was to be along great athletes, share amazing experiences, and provide on-site treatments and injury prevention tips. I really wanted to help the team be as healthy as possible so they could achieve their goal of winning the championships. Having trained with the UBC team during the 2005 season definitely brought back lots of memories. It did not feel like 7 years had gone by.

Early in the season I met with Mike Mosher, the Thunderbirds’ head coach. He embraced the idea of having an onsite practitioner that could provide the necessary treatments such as active release technique (ART), kinesio taping, biomechanical assessments, functional rehab, etc.. to get the players more physically optimal. I decided to provide my services on Wednesdays and Fridays at the UBC Thunderbird stadium. Before my first treatment I had asked coach Mosher to provide me a platform to give an introductory presentation about myself and let the players know a little about my skills and techniques. The players were very open to the idea of me joining the team and accepted me with a very warm welcome. After attending the first practice just to observe the players, I knew right away that there was something special about this team. I had never seen such a cohesive group in any team setting. I felt the magic.

During the treatments, I got to know so many of the players very personally such as Navid Mashinchi, Milad Mehrabi, Devon Gunenc, Steve Johnson, Tyler Mertens, Andre Herath… just to name a few. Some were my weekly patients and some less frequent. It was very fascinating to me that all the players were asking me for advice about their future plans in terms of education and training to become practitioners. So many were interested in chiropractic, physiotherapy, and athletic therapy. I could remember that I was in the same shoes as them just a few years ago; unsure and uncertain about the future and my career path.

I am glad I was able to help the players with their injuries and help the team win the nationals. I am also very happy to have made so many new friends and future colleagues. My best memory this year was when the players and coach Mosher presented me with a gift and a framed picture of the team as a thank you and appreciation during the season-end celebration dinner/award. I must say that it was a great pleasure of mine to be part of something this special. Achievements like this come only once every few years. I am very excited and look forward to working with the team in the future.