What is the best way to lose weight & fat? Aerobic Exercise or Weight Training? 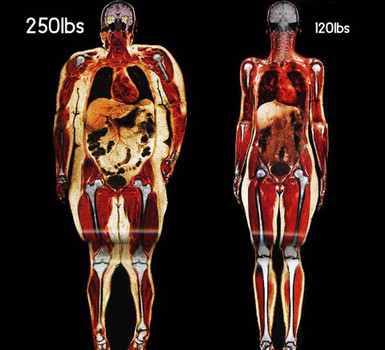 Obesity has become a global epidemic, especially more prevalent in our modern western societies. There has been great controversy and debate between health professionals, researchers, trainers, and therapists as to which mode of exercise, aerobic vs. weight training, is the champion when it comes to losing weight and fat. The proponents of aerobic exercise, such as running and cycling, argue that the continuous increase in heart rate, metabolism, and energy expenditure leads to burning calories, which in turn, results in weight loss and fat loss. Conversely, the proponents of weight training argue that by increasing the muscle mass (lean body mass) the resting metabolic rate (RMR) goes up, thereby increasing the daily energy expenditure needed to keep up with the increased metabolism. The amount of calories burnt in a day, as they argue, will surpass the amount of calories burnt if one relied solely on aerobic exercise. However, the research behind these claims is not conclusive. To add to the controversy and debate, there have not been too many conclusive studies that directly compare the effects of aerobic exercise vs. weight training for reducing weight and fat.

On September 27, 2012, an article from Duke University was published in the Journal of Applied Physiology, which compared the “Effects of aerobic and/or resistance training on body mass and fat mass in overweight or obese adults” (J Appl Physiol 113:1831-1837, 2012). The researchers suggest that their “current report represents the largest randomized trial to directly compare changes in body composition induced by comparable amount of time spent doing resistance and aerobic training, or both in combination.” The major details are as follows:

The authors came up with the following conclusion: “If increasing muscle mass and strength is the goal, a program including [weight training] is required. However, balancing time commitment against health benefits accrued, it appears that [aerobic training] alone is the optimal mode of exercise for reducing fat mass and total body mass.” Now what does this mean?

This means that based on this study, if your goal is to decrease body mass and fat mass ONLY, then doing aerobic training is the best and most efficient means of exercise. A combined effect of resistance training and weight training does not give a significant cumulative effect in terms of weight loss and fat loss. However, one must also consider the health benefits associated with doing weight training such as increased lean body mass, increased strength, improved joint function, improved cardiac function, etc. Given these health benefits, weight training, in my opinion, should always be used in conjunction with aerobic training because the goal of exercise should not just be weight/fat mass loss.

Please SHARE this article if you find it useful to help spread knowledge and understanding!